Stripax® - the original stripping tool, is now in its fourth incarnation and setting new standards. 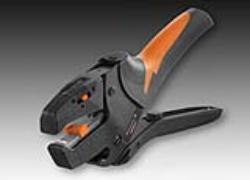 Weidmüller have launched its' new stripping tool which is once again setting the benchmark for precise and economical conductor preparation. Being convinced that even successful and approved tools can be optimised in their technical performance, Weidmüller has continued to improved the stripax®.

A detachable grip plate allows different handle sizes to suit small as well as large hands so the tool can be operated precisely and effortlessly. The compact and lightweight tool measuring just 190mm in length and weighing in at just 175g, has a hinged protective cover for the cutting edges, thus preventing accidental damage of conductors and allowing quick and safe stripping.

A new and unique feature called partial stripping, which can be activated separately, leaves the insulation off-cut on the conductor, preventing the conductor from fanning out. This simplifies the insertion of the conductor into wire end ferrules and other possible contacts.

The exchange of the blades is quick and easy by removal of the clamping jaws. Personalised marking with an individual print using the ESG device marker allows personal identification of the stripax®. An integrated injector avoids insulation off-cuts being stuck between stop and blade.