Own Meggers' last ever AVO

Megger ceased production of its' iconic AVO 8 analogue multimeter in 2008 but the electrical test equipment specialists are offering their last ever unit to be won in a competition. 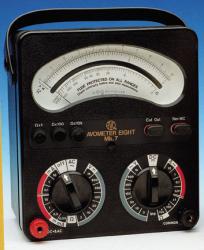 Testing technology never stands still, and Megger prides itself on being a company that not only stays abreast of the latest innovations, but also creates and drives those innovations forward. That is as true today, as it was in 1923, when the AVOmeter, the worlds' first multimeter, was launched by Meggers' predecessor, the Automatic Coil Winder and Electrical Equipment Company. AVO multimeters were to remain in continuous production for more than 85 years.

However, every product range eventually comes to the end of its life and late in 2008, production of the iconic AVO 8 analogue multimeter finally ceased. Though there was still a steady demand for this venerable product, even though it had long been surpassed in performance, dependability and even value for money by modern instruments in the Megger range, its final withdrawal was forced by the impossibility of obtaining the components needed to build it.

As soon it became public knowledge that production of the AVO multimeter was to end, orders were received within just a few days for the whole of the final batch. However, one instrument – the very last AVO that will be shipped from the factory, has been held back and now you have the opportunity to win it.

All you have to do is to send Megger your most amusing story relating to your experiences with either an AVO multimeter or other Megger instrument. Your entry must be no more than 200 words and you can either send it by email to competition@megger.com or by post to AVO Competition, Megger Limited, Archcliffe Road, Dover, Kent, CT17 9EN, England. Entries must be received no later than 31st December 2009.

Entries will be examined by a team of senior Megger engineers and managers, and the sender of the one that they judge to be the most amusing will receive a superb AVO Model 8 Mk 7 multimeter, complete with a certificate confirming that it is the last AVO Model 8 multimeter. At the time they were discontinued, these instruments had a list price well over £500 but given its unique status, the competition prize should be worth far more!

The winner will be notified by 31st January 2010, and Megger will print details of the winning entry in a future issue of Meggers' Electrical Tester. Other entries may also be printed at the sole discretion of the judges, and the writer of each entry used in this way will receive a Megger AVO310, Meggers' latest low cost digital multimeter, which was designed and is assembled in England, continuing the tradition from the original AVOmeter. The full rules for this never-to-be-repeated competition can be found at www.megger.com/competition.