Featuring compact construction and straightforward operation, Megger’s latest EGIL circuit breaker analyser is suitable for testing timing and travel on all breakers that have a single interrupter per phase. 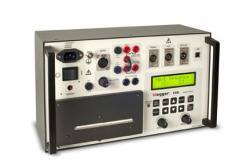 In addition, when used in conjunction with the SDRM option and the new SDRM201 accessory, the instrument can also be used to carry out static and dynamic resistance measurements.

Although the EGIL is available at a very attractive price, no compromises have been made on its versatility or performance. It is, therefore, an ideal choice for operators of small power plants and for the maintenance of simple circuit breakers by power distribution utilities.

To aid ease and speed of use, the EGIL has a built-in sequencer that automatically runs the selected breaker operating sequence while making the appropriate measurements and recording the results. In addition, menu-driven procedures invoke sensible default settings, thereby eliminating the need for time-consuming pre-setting.

Two additional galvanically isolated timing channels are provided for auxiliary contacts. In addition, an analogue channel is available as an option. While primarily intended for monitoring contact motion, this channel also finds many other applications.

For EGIL test sets that have the SDRM option installed, the SDRM201 module extends the facilities to allow accurate resistance measurements to be made on circuit breaker contacts and other low-resistance devices. When used with the test leads provided, the SDRM201 is capable of supplying an instantaneous current of 200 A DC, falling to 140 A after one second. Multiple tests can be run with only a short waiting time between them.

To complement the latest models of its EGIL circuit breaker analyser, Megger has introduced a new version – R03A – of its CABA Win computer-aided breaker analysis software. Designed to run under Microsoft Windows on a standard PC, this adds full support for static and dynamic resistance measurements, new test plans for applications where the EGIL is used with the SDRM201, and 19 new timing parameters for multiple operations.