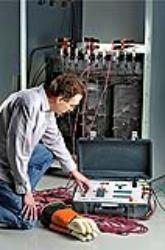 This unit is ideal for checking the operation of on-load changers, which are one of the most common causes of transformer problems.

The Fast Test technology employed in the MTO210 has been specifically developed by Megger to stabilise the test current in the shortest possible time, thereby significantly reducing test times.

Further time saving features include dual channel operation, which allows the resistances of transformer primary and secondary windings to be measured simultaneously, and bi-directional current output capabilities that allow users to take advantage of any existing magnetisation in the winding core to aid rapid current stabilisation.

When used to check the contact resistance of make-before-break tap changes and voltage regulators, the MTO210 provides fast, dependable indication of pitted or misaligned contacts. As a further aid to the convenient testing of tap changers, a remote probe is available which allows the user to operate the tap changer while the tester is in operation.

To ensure safe operation, circuitry is included that automatically discharges the winding or windings under test when the test is completed, if a lead is accidentally disconnected, or in the event of a power failure. Provision is also made for driving a warning beacon, and for interlocking the operation of the instrument with, for example, a safety fence.

The MTO210 offers facilities for demagnetising winding cores before or after resistance testing is carried out, and it can also be used as a standalone core demagnetiser. Its versatility is further increased by its wide resistance range of 1 µΩ to 2,000 Ω, which allows it to be used for heat-run testing of many types of transformer.

Test results are shown on large liquid crystal displays, and can also be stored in the instrument’s internal memory for later printing or downloading. The MTO210 is fully compatible with Megger’s PowerDB software, which provides uniform test result analysis and reporting features for all types of power equipment tests.

Weighing less that 13 kg, and built into a rugged case with a hinged lid and carrying handle, the MTO210 is equally suitable for use on site and in the workshop. It is supplied complete with a set of 10 m test leads, and accessory 20 m leads are available as an option. All leads feature ruggedized Kelvin clamps that eliminate the need for bushing adaptors.