German heavy-haulage trailer innovation Goldhofer and US transport specialist Berard Transportation have teamed up to provide a solution to a Herculean task of transporting two steel oil platforms from Louisiana to Alaska. 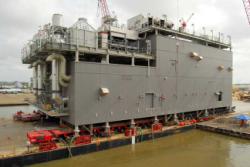 The platforms of 4,000 tonnes and 3,500 tonnes, will underpin the billion-dollar Nikaitchuq Development Project in Alaska. Transporting them from Berard Transportation’s base in New Iberia, Louisiana to their shipping dock was no small feat in trailer technology to accomplish – which is why the American company called on Goldhofer for help.

The Memmingen-based experts came up with two vast self-propelling super-structures (Goldhofer modules THP/SL-E and THP/ES-E), which are designed specially for the transportation of extremely heavy equipment. Between the two structures, no fewer than 144 axles and 1,152 wheels were needed to bear the weight of the platforms.

“Goldhofer has always thought outside the box and risen to the challenge, however difficult,” says Collins. “That said, I’m still impressed at the sheer size and complexity of these structures.”

Like its German project-partner, Berard Transportation also has a history of devising strong solutions for awkward, heavyweight machinery – but CEO Johnny Berard admits that the prospect of transporting these oil platforms was a daunting one nonetheless;

“So many factors had to be taken into consideration for this project that it really was quite a mammoth task to take on. We managed it though, thanks to the technical expertise of the designers involved.”

The Nikaitchuq Development Project is a joint venture between oil production corporations Kerr-McGee and Armstrong Oil & Gas, founded in 2004. It is located in the Beaufort Sea off Alaska’s North Slope.

Goldhofer is a global specialist in heavy haulage and special transportation. It provides transport solutions for everything from super-yachts to submarines, as well as plant and materials for the mining, construction, chemical and power industries.

Andover Trailers are sole UK distributors of Goldhofer heavy haulage equipment in the UK and Ireland.