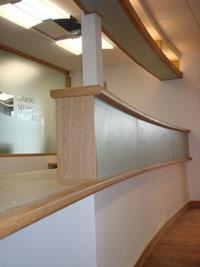 The new state-of-the-art Harbour Medical Centre was privately-funded by practice GPs Dr Idango Adoki and Dr Ibelema Cookey who bought an area of land opposite the old doctors’ surgery from construction company Carillion.

Floor-standing and wall-hung medical storage units in a variety of pastel colours were specified for the GP treatment rooms, along with worktops from David Bailey’s Healthline furniture range. For the health centre’s reception area, David Bailey designed a bespoke reception counter with built-in storage units.

Practice Manager, Nikki Cleary, said: “Since we opened our doors in December, we’ve had countless compliments from our patients about the look and feel of the new health centre. Furniture supplied by David Bailey Furniture Systems has been installed in the majority of our GP treatment rooms, but their most significant contribution is our custom-made reception counter. It’s much larger than the size of our old reception desk, so we’re no longer tripping over each other trying to serve patients.”

Until the opening of the new medical centre, Harbour Medical Practice was operating from a converted four-bedroom detached house for six-years, with limited resources. The new health centre has a fully equipped operating theatre and has consulting rooms for four doctors and additional rooms for complimentary practices. It is anticipated that the new medical centre will allow the doctors to increase the number of patients from 4,600 to around 8,000.