Leyland-based Ad-Options Ltd have signed up to a super partnership deal with their favourite Super League club which sees the business gift promoters’ branding featuring regularly at home games of one of this season’s title favourites. 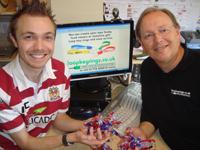 The business gifts company have enrolled as ‘Official Partners’ of Wigan Warriors’ Community Stadium at Orrell, which doubles up as their training ground and academy match venue, as part of a deal which will see the LoopKeyrings.co.uk brand feature across a range of club outlets, including two stadia and their official website.

Current Super League leaders Wigan Warriors have been long-time customers of Ad-Options Ltd, with a reciprocal deal previously seeing LoopKeyrings.co.uk in place as one of the rugby league club’s website sponsors.

Now the relationship has been extended with the Ad-Loop site being promoted at first team Super League and Challenge Cup fixtures via the programme and electronic scoreboard, at the Community Stadium as part of a pitchside advertising board, and in various other publications such as the weekly Lotto results sheet, in addition to a return to the official club website.

Ad-Options were represented at the launch of the club’s ‘Shooting Stars’ programme by marketing manager Adrian Ward, who believes that the package will be of great benefit to the company, explaining:

“As a supporter of Wigan Warriors who has attended the vast majority of their games – home and away – for the past decade, it will be a great moment to see our advert being unveiled at first team and academy games, knowing that our investment is helping to fund the club’s training facilities, which have helped to nurture dozens of quality players over the past couple of years.

“There can be few clubs at the elite level of any sport who can field a winning team of almost entirely home-grown, home-town players, but Wigan can and regularly do, so we hope that our support allows that to keep on happening.

“The benefits for ourselves are plentiful too. We were very pleased with the results of our last web advertising campaign with the club, and this time we’re able to repeat the campaign with a mixture of online and offline advertising to try and get ourselves noticed amongst a whole host of different crowds.

“Most of all, we’d love to think we could release a range of ‘Super League champions’ or ‘Challenge Cup winners’ loop keyrings at the end of this season. The way they’ve started this year, there’s every chance that we could!”