OKW has added a new 3 modules size to its popular RAILTEC-B range of DIN rail enclosures. RAILTEC-B is now available in 2, 3, 4, 6, 9 and 12 modules sizes. 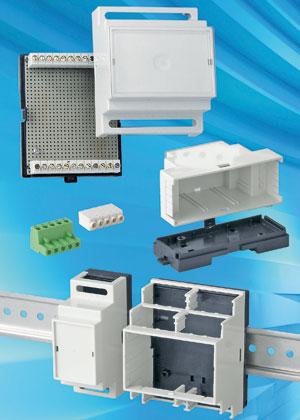 These high quality DIN rail enclosures suit a wide range of applications, notably machine-building and automation. They also are particularly useful for electrical control equipment such as lighting controllers.

Five versions of RAILTEC-B are available:

Enclosures can be specified with ventilation or as open cases for adding a partition plate and various combinations of terminal guards.

RAILTEC-B can be fitted quickly to TH35 x 7.5 mm DIN rails. The base of each enclosure is manufactured from polyphenylene oxide (PPO, UL 94 V-0) for high temperature resistance and the top from polycarbonate (PC, UL 94 V-1) for extra strength.

Also available as an accessory is the RAILTEC-BUS system which allows quick and easy interconnection of DIN rail enclosures that share common power or signal connections on the same rail.

Customisation options for RAILTEC-B and other OKW enclosures include CNC milling and drilling; silk-screen and tampo printing of legends and logos; EMC shielding and assembly of components.