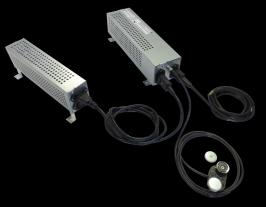 Field based control enclosures mounted outside are susceptible humidity changes that can cause condensation to occur which will shorten the life of components as well as making the equipment dangerous. To prevent this, manufacturers will often include an enclosure heater as part of the design.

This will typically be in the range of 60 – 120 Watts, powered continuously, even when not required. However, to combat the rising costs of energy, Drallim Industries have developed the Drallim Anti-Condensation System (DACS), which eliminates wasted energy, thereby lowering your carbon footprint and reducing your operation costs.

The DACS is a microprocessor based system which simultaneously monitors the ambient air temperature and the dew point within a control enclosure to ensure that the heater is powered up only at the appropriate time to maintain condensation-free operation.

This provides superior control than that provided by monitoring either air temperature or dew point reliability and reduced maintenance of the control enclosure’s other components, as well as substantial savings in electricity costs.

For larger control enclosures, up to 3 additional slave units (DACS-Ex) can be connected to the DACS to increase the heating capacity to 400 Watts. Universal mounting plates are also available.