In a triumph of set design, a theater builds a swimming pool

Audiences going to New York Theatre Workshop will see something unusual when they enter — a swimming pool. Not a little wading pool or artful images of water. A real pool. 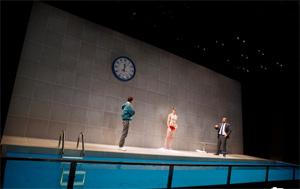 "We knew we had to have the element of water, but we didn't know how," said Hernandez during a tour of his pool, which is heated and has lights embedded underneath.

The elevated pool runs the length of the stage and its glass panes allow the audience to see actors really swimming, like peering into a cross-section of an Olympic-sized aquarium. Steel and glass hold back thousands of gallons of water.

"We knew that since we had real water, everything that we used had to be real materials," said Hernandez, whose Broadway credits include "The Gin Game," ''The Gershwins' Porgy and Bess," ''Caroline, or Change" and "Parade."

"Red Speedo" is about a swimmer who, on the eve of his Olympic trials, is implicated in a drug scandal. It explores the business of winning and the attraction of juicing. (Hernandez calls it a mix of "ancient Greek and David Lynch.")

Hernandez initially considered yanking out some of the New York Theatre Workshop's 199 seats to put the pool next to the audience, but decided to make it more like an installation. "By doing that, we knew we could be more theatrical," he said.

He worked closely with director Lileana Blain-Cruz and stage manager Terri K. Kohler on the design. An outside contractor won the bid to build the pool and the New York Theatre Workshop built the massive, curving back wall of tiles, which have a bit of grit to stop slipperiness.

Hernandez, respected for his bold ideas and love of function, had never done a full-on pool before. "I've done crazy stuff but never an actual actor swimming in front of the audience, no," he said, laughing. But while he learned a lot about how to build a real pool, he tried not to limit his vision.

"Truth be told, if I knew too much, I would probably have edited myself so I decided not to know anything other than let's get it right and let's beg and plead and pray that we could actually do it."

The use of real water in theater has a long history, including such recent examples as the flooding of the Eugene O'Neill Theatre in ankle-deep water during the 2003 Broadway revival of "Nine" and heavy rain falling in the St. James Theatre for "Leap of Faith" in 2012. This season, the stage of the Studio 54 theater was turned into a lake for "Therese Raquin" but it was shallow.

The pool that Hernandez helped build — on budget, by the way, for under $100,000 — is a different thing entirely. Submerged actors can actually stroke through the water, light bounces off it beautifully and the playwright's symbolism is enhanced.

Hernandez initially dreamed of having a seamless piece of glass greeting visitors but financial and technological restrictions meant he had to settle for steel seams every few feet. He doesn't mind now: "I find them beautiful because it's not lying. It's holding thousands of pounds of weight."

For all the ingenuity and work that went into making the pool, there's one thing Hernandez has yet to do: swim in it. He considered making the plunge one snowy day before rehearsals, but backed down.