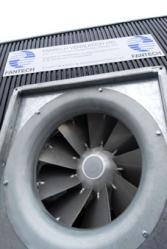 The move follows 5 years of successful trading. The company was founded in 1999 by Brendan O’Toole in the front room of his house and the boot of his car. Brendan is one of three qualified engineers who between them, have over 60 years experience.

The companys’ sustained growth led to the move after a short stay at the previous Tolka Valley site due to the need for greater stockholding capabilities. Brendan explained; “The move to Cookstown Road is a significant step forward for the company.  The space that the new premises offer will afford us greater scope not only to manage, but to exceed, our customers’ wishes and expectations.”

Brendan continued; “All items from our ranges are now in stock and available for rapid despatch to our customers.  We have a great team of qualified and very competent people here at Fantech, who have welcomed the move and are looking forward to similar success and growth over the next five years.  Here at Fantech Ventilation, we have a wealth of experience in solving ventilation problems and by working with customers’ engineers and design teams, we are confident of providing the correct solution for any ventilation installation.”