Sales at evacuation product company SwallowEMP, which was formed only five years ago, continued unabated during the recent recession and last year sales nearly doubled for the company. 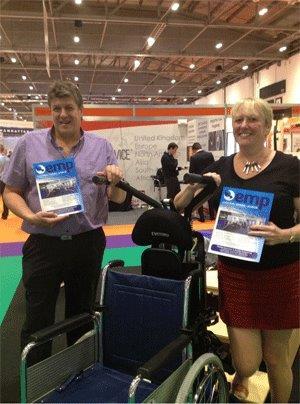 Sales at evacuation product company SwallowEMP, which was formed only five years ago, continued unabated during the recent recession and last year sales nearly doubled for the company.
To some extent the market is driven by legislation but against strong competition SwallowEMP has done very well by any account.  “ We pride ourselves in providing the right equipment to different customers and organisations looking to evacuate people of all disabilities from buildings in the event of fire”, says Julia Hampson, Director at SwallowEMP.  “We probably have one of the largest ranges of product equipment available on the market, which helps us to find the right solution.
Most private or public organisations have a duty of care to ensure that in the event of fire, everyone can safely evacuate a building down the stairs whether able bodied or not.  It was in 2010 that the Equality Act was introduced which took over from the previous Disability Discrimination Act, the Race Relations Act and Sexual Discrimination Act, and this allows for people to move freely and fairly in and out of a building.
Testimony to SwallowEMP’s success is the number of big name companies and organisations that have specified the company’s equipment.  The long list includes the likes of Wimbledon Lawn Tennis Club, the Royal Shakespeare Theatre in Stratford, the University of East Anglia, several London universities, the Royal Astronomical Society in Piccadilly, the Scottish Government and HMRC to name but a few.
SwallowEMP’s most popular product is its CD7 Evac-Trac which is a manual evacuation chair with the important feature of an auto-brake facility and which allows any operator to safely evacuate an individual down the staircase and out of a building.  However the vast majority of SwallowEMP’s evacuation products are powered, making it the leader in powered evacuation chairs.  These have the chief advantage of much greater control in moving people as they don’t rely on the physical strength of the operator.  They also allow the movement of people up stairs as well as down stairs.  There are a wide variety of types available to suit single users, users in wheelchairs, and those in powered wheelchairs.  There are even models that can negotiate curved and spiral staircases.  Also available is a powered wheelchair lift moving wheelchair users off and onto aircraft.  Not content with just moving people in an out of buildings, SwallowEMP also has a range of powered stair climbers to carry anything from normal goods to pianos.
It’s not only in the event of fires that evacuation chairs are needed.  SwallowEMP are being approached increasingly by housing associations and nursing homes for instance where lifts have broken down and there is a need to move less able people up and down stairs.  The company is helping more and more educational establishments, as with more children coming in powered wheelchairs, its equipment is much needed as many of the buildings have no lifts.
There is no doubt that SwallowEMP are an experienced and committed company which wants to help other companies look after the well-being of its employees and visitors in the event of an emergency.  Based on its track record to date, the company is confident about the future, “Over the next three years we are looking to double our sales year on year and to help us do this, we are currently looking at taking on more agents and dealers, particularly for the hire market where the equipment can be rented for events such as weddings and university graduations”, comments Julia Hampson.
SwallowEMP is the biggest seller in Europe of the Japanese brand of Sunwar evacuation equipment and is the exclusive distributor of the evacuation products from the Italian company the Antano Group.