Colourtex has been used to regenerate the communal outdoor facilities of a South East London residential area as part of the Alsike Road improvement works. Yarnton Way in Thamesmead is a residential complex comprising Harlequin, Dexter and Argali House tower blocks, which are undergoing improvements to increase safety and recreational enjoyment for the residents. 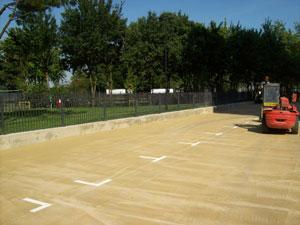 Gallions Housing Association, which is now part of the Peabody Group, used Bituchem’s Colourtex product in Buff to re-surface 5,000 sq.m of roads and footpaths around the tower blocks to provide clear demarcation that is aesthetically pleasing.
The 6mm Colourtex application formed the first stage of the development project that aims to improve the landscape and urban environment by removing barriers such as walkways and garages. The Colourtex product provides clear, direct and safe routes to residents’ homes while equipping the area with a suitable base on which to improve lighting and signage.
The resurfacing also enhanced the parking provision for the residents and by extending the same Colourtex material helped to define three secure communal gardens and a dog walking area.
Dan Hill, Head of Thamesmead Strategy at Peabody, commented on the Colourtex product, “After considering various options of slabs, tarmac and paving the project team agreed that Colourtex was the best option. Following a quick and simple application, Colourtex has proved a good choice to create a positive environment for our residents.”
The aesthetic and durable qualities of Colourtex are achieved through the use of a clear binder combined with high performance coloured aggregates, allowing for vivid colours without compromising on performance. Available in a range of colours including red, blue and gold, Colourtex has a wide variety of applications in both the public and commercial sectors, being used for playgrounds, cycle paths and supermarket car parks.