BAM Plant - part of built environment group BAM Construct UK - has installed the Bull Products Cygnus wireless fire alarm system on over 10 construction sites. The new system was launched in May this year. 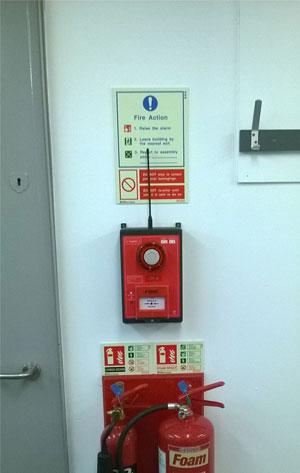 BAM Plant - part of built environment group BAM Construct UK - has installed the Bull Products Cygnus wireless fire alarm system on over 10 construction sites. The new system was launched in May this year.
One of these projects is a new development Hayes Retail which incorporates an Asda supermarket of 8,000 sq.m. floor space including car park and petrol filling station. Due to the large site footprint and separate office and welfare complex, the project management team at BAM Fire Protection Services has chosen to install the Cygnus system as the temporary fire alarm system.
Mike Whitfield, Contracts Manager at BAM Fire Protection Services was extremely impressed with the development of the new Cygnus system by Bull Products. He comments, “We were looking to adopt a wireless fire alarm system within the group and as Bull Products were very responsive to our needs and were happy to develop a system with us, we have been pleased to specify the new Cygnus system.  We particularly like the system’s addressability and the integrated first aid alert call point which satisfied our needs.”  Bull Products are now working on a future option for controlling panels remotely. BAM’s London team have recognised the benefits of the system by issuing a Best Practice safety bulletin.
Launched only two months ago, the Cygnus wireless fire alarm system has the capability of linking together no less than 480 units in 15 different zones around a construction site, with each zone having the capacity to accommodate 32 units.   The individual units can be fire alarm call points, first aid alert points, smoke detectors, heat detectors and a combined call point first aid alarm.  The alarms which can be used time and again are addressable to the panel and can be re-addressed very simply after being relocated.
Intended purely for use on construction sites, the Cygnus system has been specifically designed for use in dense concrete and steel structured buildings and areas where there are many other radio frequencies in operation, and so particular attention has been given to achieving an impressive connection range.  Where there are multiple sites within range of each other, the Cygnus system has been designed to operate on different site addresses in order to keep each system separate and free from interference.
A major feature of the Cygnus system is the optional control panel which provides a very sophisticated capability with an event log function which records any events such as an alarm activation, low battery warning, and signal faults, all of which can be viewed if necessary in the history folder held on the panel.  The system also has the ability to test all units and has an evacuate function which will act as a call point to the rest of the alarm units.
Each unit in the system can provide the panel with information at regular intervals.  This explicit information confirms the unit is still present and what the battery status of each device is.  Known as the ‘heart beat’ this message is monitored by the control panel where fitted and if the ‘heart beat’ is not heard for several intervals, the control panel logs a full status for that unit.
Bull Products offers a one-year guarantee on all Cygnus devices and provides high levels of technical, on-site and after-sales service support in addition to its standard maintenance contracts.