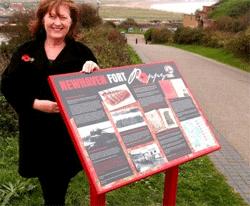 The Sussex Sign Company had the privilege of working with Jenny Flood, Project Officer, from the Newhaven Town Council, on a heritage project that took months of planning.

The interpretation panels are around the town as part of the Council’s Heritage Lottery funded project ‘Newhaven’s First World War’. During the First World War, Newhaven became one of the major supply ports to the Western Front. The number of soldiers at the Garrison increased to over 4,000, the Boys’ School (Hillcrest Centre) was converted into a Military Hospital and a Seaplane Station was built on the beach between the East Pier and Tide Mills.