One of only six adolescent forensic psychiatry in-patient units in England has reopened its wards to young people with glowing praise for the project team who performed the £3.5m redevelopment. 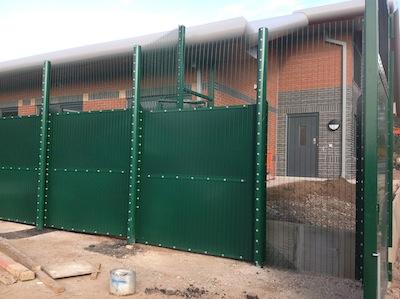 As inpatients, they receive assessment and treatment of mental health issues – such as depression, bi-polar disorder, psychosis and schizophrenia – and many arrive with or acquire Autistic Spectrum diagnoses as well. Ardenleigh houses some of the country's most mentally disturbed teenagers, who have been detained under the Mental Health Act and have usually committed a criminal offence, and was opened in 2003, so was due for upgrading.

At the re-opening, Simon Parkes, Capital Developments Manager for the Trust, said:

‘I want to thank the project team for all their efforts, not only over recent weeks, but for the duration of this project from day one. Numerous people, clinical and non-clinical, have commented upon the building regarding the high standard of finish and attention to detail. ‘The young people who move in today and in the future will receive the best quality care in an environment second to none, which is the most important outcome of all our efforts.’

Alongside the accommodation for troubled teenagers is their school, which has recently gained the status of a Certificate of Quality of Autism Provision, run by James Brindley School, which provides education at five hospitals across Birmingham, including Ardenleigh and the Birmingham Children’s Hospital. The redevelopment led by main contractor E Manton upgraded the decade-old unit on the same site, providing 18 ensuite bedrooms, lounges and dining rooms in three wards all separated by a central hub and staff rooms for ease of observation of wings.

The wards are called Atlantic, Pacific and Adriatic to reflect a calming ocean theme. Security was paramount given the nature of the young people on site, who might pose a significant risk to themselves or to others. High-security perimeter fencing expert Zaun was appointed to design and install the fencing solutions at a cost of £100,000. They supplied almost 200m of their HiSec fencing in different heights, reflecting three different categories of security rating. Internal fencing, and that surrounding a ball court and enclosing outdoor stairways, was just 2.4m or 3m high. But perimeter fences ran to 5.2m in height and were buried in a concrete sill for added security.

Zaun also installed aluminium sheeting on some of the boundary fencing to provide privacy to the inpatients and to prevent them from being distracted by events beyond the hospital. Zaun’s HiSec uses the ‘358’ welded mesh to repel would-be intruders. The close 76.2 x 12.7mm mesh means that it is almost impossible to climb, and is very difficult to cut with anything other than power tools. Hence why the Home Office uses it for prison perimeters and other secure sites such as Ardenleigh. It is also increasingly specified on schools, where pupil safety is paramount as good through visibility means staff can easily see what’s going on on the other side of the fence, but the mesh is so fine that items can not easily be passed through.

The Ardenleigh site also contains a unit for mentally ill women. Similar units in the region include Hatherton Centre in Stafford and Reaside Clinic in Rubery, both of which are for men only.