A £5.7m project at London Zoo to help save the Asiatic lion is largely built – and just requires London's pride to get used to their new home before it is opened to visitors in Easter 2016. 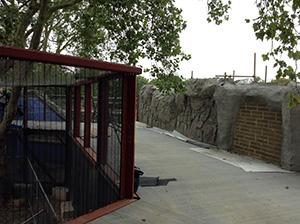 Land of the Lions covers more than 2,500 sq m, or half the size of a football pitch, and will be five times the size of the previous enclosure. London Zoo's plan is to increase its number of lions from five to 12 and ramp up its conservation work in India to help boost the species' dwindling numbers.

Asiatic lions have been almost wiped out in India but conservation efforts by the western state of Gujarat over the past 50 years have saved them from extinction, though as few as 400 are thought to live in Gujarat's Gir forests.

Zookeepers and conservationists have collaborated to design Land of the Lions to meet every need of the Asiatic pride at London Zoo.
Inspired by the landscape of the Gir Forest, visitors will experience a bustling Indian ‘village’ with breath-taking 360° glimpses of the den and its custom-built ‘hotel’, where the Asiatic lions, which can sleep 16 hours a day, will enjoy their cat-naps.

A special walkway fitted with high security 358 steel mesh by fencing installer Binns Fencing will give millions of people the best chance to get up-close to the big cats while feeling totally safe.