A state-of-the-art multi-sports pitch in Wigan installed only three years ago could receive further investment and upgrade under plans proposed by the town’s legendary rugby league side. 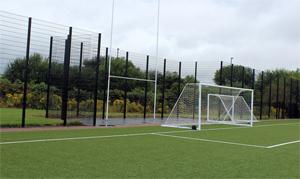 Wigan Warriors have entered negotiations with Wigan Council to look at the feasibility of moving the club’s Central Park operations to Robin Park Arena, in the shadow of Wigan FC’s DW Stadium.

Inspiring Healthy Lifestyles, which currently runs Robin Park Arena and its associated leisure centre, are part of the discussions with community groups to improve the health and wellbeing of the borough’s residents.

The plans would see the Warriors turn the arena into a world class sports and community leisure facility and take on its lease, saving the council £241,000 a year in subsidy and maintenance costs.

The council invested £318,000 in a state-of-the-art pitch at the arena only three years ago for sports clubs, football and rugby players in the area.

The 3G FIFA 2-star pitch, which also meets the International Rugby Board’s standard and can be used in all weather conditions, is surrounded by 5m high Zaun Limited Duo8 Super Rebound to aid ball retention.

The twin horizontal wire panels are highly durable, low maintenance, ‘graffiti-proof’ and offer great rebound properties similar to a wall.  Ten gates provide access at all points of the pitch.

The fencing was installed by nearby Dawn Fencing of Leigh, which has been going more than 30 years and is the only fencing contractor dedicated solely to sports.

At the time, Wigan councillor Paul Kenny, cabinet member for resources, said: “I am really pleased that we have been able to invest in this valuable resource for the benefit of the community. One of the things we are asking people to do as part of the Wigan Deal is become more active and healthy, and it is important that we provide quality facilities to encourage them to do so.”