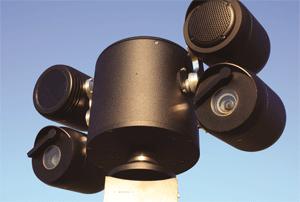 As it is highly robust to extremes of temperature, moisture and corrosive chemicals, it can cope with marine applications and other harsh environments, such as industrial chemical plants and the desert.

Developer EyeLynx, a part of the perimeter protection group Zaun, expects this top end of its Pharos range to sell well to energy infrastructure operators, such as oil, gas, electricity and nuclear networks, in Europe and the Middle East.

Chief executive officer Jay Patel says: “Optimus offers the greatest protection against crime and vandalism at a fraction of the price of manned guarding and also gathers vital HD video evidence for prosecution in the event of a security breach.  Site security operators can detect threats early with advanced sensors such as RADAR, on-fence acoustic cable and video analytics, integrated with SharpView.”

EyeLynx’s Pharos system is the only true Rapid Deployment HD surveillance system on the market with Edge Recording Cluster ERCTM capability to incorporate an intelligent recorder, management software and wireless communications all in the same unit.

Cameras record HD 24/7 and whenever the perimeter is compromised or a potential intruder approaches too close to the site perimeter, Pharos will send a snapshot alert to the control centre for visual verification using WiFi, 3G, 4G or ADSL – or even to assigned personal mobile devices, such as the police or nearest guard to the breach.

It incorporates a micro-stepping motor with no wearing parts ensuring smooth silent movement and zero backlash, while a speed range of 10,000:1 delivers precise movements even at full zoom.

EyeLynx has also unveiled an innovative mounting bracket for its Pharos pole-mounted devices with anti-tamper and anti-theft enhancements.