Commonwealth Games delivery partners looked to the largest supplier of perimeter fencing protection to the London 2012 Olympics to secure Glasgow 2014. 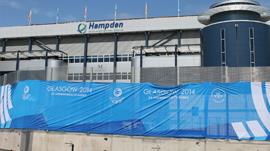 They handed almost £4 million of contracts to integrated high-security perimeter event overlay specialist Zaun to design, manufacture, install and decommission a broad range of temporary high-security fencing systems across the Glasgow 2014 sites, including Tier One venues.

Zaun’s first involvement came in 2008, shortly after Glasgow was announced as the winning city. After many months of informal discussions with the games interested partners, Chris Plimley, Zaun's High Security Systems Sales Manager, worked together with the bid teams of the potential delivery partners who answered the ITT. Selex ES, the Finmeccanica subsidiary, was awarded the prestigious contract in 2013 as the Protective Perimeter Security provider for the Glasgow 2014 Games and shortly thereafter appointed Zaun.

The Glasgow 2014 Commonwealth Games brought together thousands of elite athletes, friendly volunteers and excited spectators to join an incredible festival of sport and culture.

Zaun developed its PAS 68 MultiFence especially to resist hostile vehicle and mob attacks at the London 2012 Olympics. MultiFence has been granted a patent by the UK Intellectual Property Office.

Plimley said: “MultiFence was chosen because of the very cramped footprint around most Games venues and the ultra tight timescales for installation and post-Games removal. Also, we have gathered vast amounts of experience in delivering time critical projects, and MultiFence can be upgraded with a temporary HVM measure without the need for foundations.”

Zaun also worked with Olympic Park contractor Skanska and stadium contractor BAM Nuttall to secure the 20km boundary of the main Olympic Park, with a further 1.5km of Zaun fencing providing a ‘ring-within-a-ring’ around the Olympic Stadium.

The Glasgow 2014 Commonwealth Games was the latest global event to entrust the security of its stakeholders to Zaun.

As well as the extensive use of its systems at London 2012, the UK manufacturer has supplied The English Football Association's training centre at St George's Park, Meydan Racecourse in Dubai and the 2013 G8 Summit in Northern Ireland.

Zaun installed 13km of fencing for the UK’s largest ever police operation involving 9,000 officers from 29 of the UK’s 43 police forces for the two-day NATO Conference at Newport's Celtic Manor and key sites in Cardiff last September.