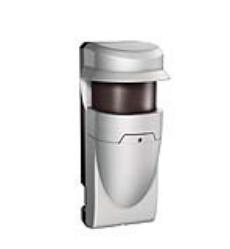 Redwall has been the market leader in outdoor PIR sensors for use in CCTV systems for over 10 years. Their rugged design and unrivalled detection capability have made them the sensor of choice for security installers around the globe and due to their high levels of reliability, the Redwall range is recommended by all the leading UK monitoring stations.

The detectors utilise Optex patented technology that makes them more resistant to environmental effects which can cause false or missed alarm activations. The sensors coverage patterns are designed to perfectly match commonly used camera/lens combinations as instructed by the new BS8418 standard. They can detect a moving objects size, speed and distance, and process that information with an unique algorithm, resulting in a high-reliability detection of intruders with minimal false alarms.

The new Redscan, when mounted vertically, creates a 60-metre detection area that functions like an invisible wall. If sited horizontally, it creates a detection area of 30-metres and an arc of 180 degrees. With four outputs for remote video applications and four truly programmable detection areas linked with these outputs, Redscan is ideal for controlling pan/tilt/zoom (PTZ) cameras.