Jersey Air Traffic Control has recently installed four Condair steam humidifiers at its centre in Jersey Airport, which is responsible for the coordination of air traffic in the busy skies above the Channel Islands. 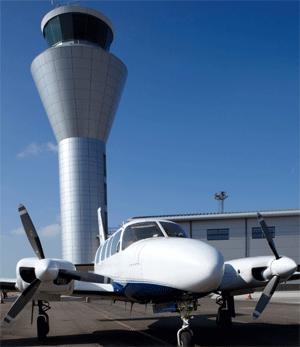 Air traffic control is a demanding role, with aircraft and passenger safety its primary goal, and the humidifiers help provide a comfortable and productive environment for air traffic controllers and engineering staff by combatting the visual discomfort created by dry air.

The Channel Islands are popular destinations for commercial airlines and private aircraft pilots alike, and high volumes of air traffic pass through its air space.  In 2014, there were over 100,000 aircraft departures and arrivals at the three airports of Jersey, Guernsey and Alderney, and almost 2.5M travellers passed in and out of them. The Condair humidifiers serve the iconic Control Tower, which controls the flight arrivals and departures from Jersey Airport itself, and areas in the air Traffic Control Centre, both of which were built in 2010 to accommodate the increasing attraction of flying to and from the islands.

Air traffic control in the Channel Islands is a highly responsible role. It has a high visual and mental workload, using purpose-designed interactive screens as essential tools, frequent interaction with aircrew and important decisions being made. Shift work, early starts and late finishes can also have an effect.  Les Smallwood, Senior Air Traffic Control Officer at the centre, explains, “The human element is important. In a job where errors could be critical, an environment that is comfortable and considers people’s well-being also supports their working needs. The humidifiers are a part of this.”

The need for humidification first became apparent amongst staff wearing contact lenses. Les Smallwood continues, “We use air conditioning to maintain an environment of 21°C but this was drying the air. People’s eyes were becoming uncomfortable, especially for those wearing contact lenses. We used mobile humidifiers at first, to prove the point, before investing in a permanent solution with the Condair humidifiers”.  Les confirms that air traffic control staff and the airport’s building services team are pleased with the results.

The largest capacity humidifier, a 30kg/h resistive steam humidifier, supplies the air handling system for the first floor of the Air Traffic Control Centre, which includes air traffic control offices and rest areas, to maintain around 50%RH. Three Condair CP3 Mini in-room humidifiers are used to do the same in the Control Tower itself and in the Air Traffic Engineering offices, whose staff are responsible for the good operation of radar, navaids, electronic equipment and associated services.

Condair resistive steam humidifiers feature a unique scale collection tank for easy and straightforward maintenance. The Condair CP3 Mini units are compact and discreetly-designed electrode boiler humidifiers, wall-mounted in the areas concerned to deliver up to 4kg/h of pure steam directly into the space. Routine maintenance is quick and kept simple by the easily exchanged boiling cylinders.

Jersey Health and Safety Inspectorate’s Display Screen Equipment at Work ACoP, confirms the importance of maintaining of a level of relative humidity that is adequate to prevent the discomfort and sore eyes that are characteristically associated with dry air, as part of an ergonomically-optimised working environment. This echoes the same guidance given in the UK Health & Safety Executive’s DSE ACoP and other European directives.

Dry air can be caused by air conditioning and also arises during cooler winter months when indoor relative humidity drops as it is heated. Even in a mild and agreeable climate like Jersey’s, it can be a particular problem for computer screen users, as the air around a screen can be drier and more prone to electrostatic effects than its surroundings, due to the increased temperature locally. Humidifiers effectively address these issues.

Maintaining a relative humidity of 40-60% has also been shown to reduce susceptibility to infection by preventing the drying of the moist lining of the mouth, throat and nose, and airborne viruses have been shown to survive for a shorter time at this level. Conveniently, the level of relative humidity that suits people’s health also provides the ideal environment for IT systems and electronic equipment.

Condair group is the world’s leading specialist in humidification and evaporative cooling, with energy efficient, hygienic and innovative technologies for commercial, industrial and heritage applications. Condair is represented in the UK by Condair plc, which offers humidification system design, manufacture, supply, installation, commissioning, maintenance and spares. Condair plc is the new name for JS Humidifiers following the organisation’s rebranding in October 2014. You can find out more by visiting the company’s website at www.condair.co.uk.