Mettler Toledo Puts Product Inspection Under the Spotlight at PPMA 2008

PPMA 2008 was a huge success for Mettler Toledo as they achieved a record number of sales leads and effectively boosted the profile of the Product Inspection division. 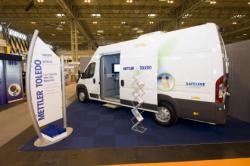 The company demonstrated a broad range of innovative metal detection, x-ray inspection and checkweighing technology at the show.  The event was used as a high profile opportunity to launch two new cutting-edge product inspection machines.

The GlassCheK Quad X-ray inspection system – a revolutionary new detection system for monitoring high risk products in glass jars was on display in the UK for the first time. In addition, the new GARVENS XS3 AdvanCheK X-ray CombiWeigher which combines world-leading checkweighing and x-ray inspection in one revolutionary and unique space saving system was also successfully launched.

In addition, visitors to the show were also able to see the SAFELINE x-ray demo van on display. The van has been successfully touring the country during 2008 and received much interest as customers took the opportunity to arrange for post show on-site visits.