A Scottish galvanizing company has played golden role in the restoration and reinstating of a set of prestigious Grade I Listed gates in western Scotland. 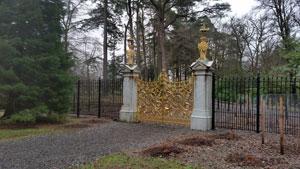 Scottish Galvanizers, part of Wedge Group Galvanizing, has teamed up with one of its oldest customers, George H Currie Blacksmiths for a project that has seen the entire estate entrance at Benmore Botanical Gardens transformed back to its former glory.

George H Currie Blacksmiths were called upon by Royal Botanic Gardens Edinburgh to renovate the famous ‘Rococo style’ Golden Gates, which were commissioned around 1880 in Berlin by renowned philanthropist and sugar baron, James Duncan – who had sugar refineries in Greenock and London. Standing at over eight foot, the gates were then taken to the Paris Universal Exhibition in 1878, where they were showcased alongside other exhibits including the Eiffel Tower, before being brought to Benmore.

Paul Tait, Customer Service Manager, explained: “This has been a great project to be part of and there’s no doubt the gates will become a main attraction at the gardens for many years to come. It was fantastic to see traditional gold leaf fabrication work being used with our modern galvanizing techniques, which ensure the gates and its intricate features, as well as the heavy ornate railings either side, are protected from corrosion, rust and weathering.”

Finlay Currie of George H Currie Blacksmiths said: “The gates fell into disrepair and were removed in the 1990s, until funding became available to bring them back to their former glory. Restoring the gates and fabricating the ornate railings and fencing was extremely time consuming but very satisfying, and it was great to have the professional services of Scottish Galvanizers to give the railing a protection that will last for a very long time.”

Wedge Group Galvanizing is the largest hot-dip galvanizing organisation in the UK, with 14 plants across the UK the firm offers a national galvanizing service. For further information visit our website.