A renowned artist has partnered with a Wednesfield-based galvanizing company to protect a commemorative project that celebrates the heritage and volunteers of Dudley Canal. 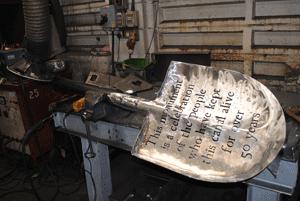 Cradley Heath-based Luke Perry was commissioned by the Dudley Canal Trust to create a bespoke piece of artwork to recognise 50 years of volunteering at Dudley Canal, which was closed by the British Transport Commission in 1962 and reopened by the general public in the late 1960s. Luke subsequently called upon the services of Edward Howell Galvanizers to ensure that the sculpture, which depicts hands holding a shovel, was suitably protected against the harsh outdoor conditions.

Luke explained: “The Trust commissioned me to produce a piece of art which recognised the hard work that volunteers have provided over the last half a century to keep Dudley Canal operational. Although I was given free reign with the entire project, I needed to ensure it was created with a focus on the canal’s history at all times. Once the piece was fabricated in bare metal, I sent it to the team at Edward Howell Galvanizers, who hot-dip galvanized it to ensure it would stand the test of time in the canal’s wet and old mining caverns.

“Some say that we don’t make things in the Black Country anymore but this piece showed that to be a fallacy – it was designed and fabricated in Cradley Heath, using steel from (and which was laser cut in) Netherton, galvanized in Wednesfield, and finished with thinned-down Hammerite from Allan’s of Netherton, before being transported to Dudley Canal by nearby Steve’s Trucks.”

Jim Lindsay, Commercial Manager at Edward Howell Galvanizers, explained: “This is a fantastic project to have been part of – Luke is a very talented artist and the works he creates are an absolute pleasure to galvanize, and we’re always delighted to make sure they continue to look as good on the first day as they do in years to come.”

Wedge Group Galvanizing is the largest hot dip galvanizing organisation in the UK with a history dating back over 150 years.  With 14 plants strategically placed across the country, the firm offers a truly national galvanizing service.