If you dig into the ground in certain parts of the British Isles you’ll soon be hitting a hard white rock - Limestone - also known as Chalk in its' softer form. 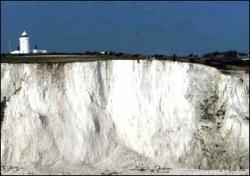 The famous White Cliffs in Dover and Wiltshires' famous White Horse are classic examples of this type of landmark which unfortunately, also means hard water areas.

Hard water is water which has run through a chalky layer of earth. The chalk, (Calcium Carbonate), dissolves into the water, which came down as rain and then ends up in the water supply and can cause havoc with your plumbing systems and connected appliances.

The problem is not so much with the cold water, which contains masses of calcium ions in solution, because this water is very good for you. Children need high calcium content in the water to build bones and teeth and it has been shown too that high levels of calcium prevent heart attacks. In fact the Calcium ion is an important factor in the metabolism of all cells and without it, we would all die.

The problem comes when water is heated, or pressure changed, as this forces the calcium ions out of solution and they then recombine with the carbonate ions to become what they were originally - but now it is a nasty hard substance called Limescale.

Limescale that can be seen is the least of worries. It is the Limescale in the boilers and heaters that cause major problems because here the thick deposit acts as an insulator and prevents heat escaping from the elements to heat up the water. This means a sharp increase in heating costs.  Add to this the hugely damaging effect the limescale has on all connected appliances, the restriction of water flowing in pipes and the mess it makes, prevention is better than cure.

The answer maybe a water softener as this will remove all the hardness from the water before it gets into the supply. Water softeners in the main use salt and require plumbing. They are in fact just another thing to look after and without a constant re-fill of salt, they fail.

Alternative solutions include electronic limescale prevention such as the Little Plumber range of electronic water softeners, which require no chemicals or maintenance. Costing a fraction of the price of a water softener, they can be installed by any DIY enthusiast and are actually guaranteed to work.