Testing to address the transformer threat

To maintain the reliability of the public electricity suppy in the future, routine diagnostic testing of transformers by the power utilities is no longer optional – it’s a necessity, says Megger, one of the world’s leading developers and suppliers of tran 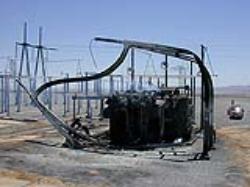 Megger’s opinion is reinforced by an article recently published by Lloyds of London, which identifies transformer failures as one of the biggest risks to the security of electrical supplies to homes and businesses.

Many of the transformers in the UK electrical supply network have now reached or even passed the service lives for which they were designed, which means that the possibility of failure is increased. Replacing defective transformers is, however, becoming increasingly problematic.

Limited worldwide manufacturing capacity, coupled with strong demand from economically buoyant countries like India and China, means that prices are rising fast and delivery times for the largest types are now measured in years. Failure of a major transformer in the supply network can, therefore, give rise to long-term problems that are very difficult and expensive to address.

While routine testing cannot completely prevent transformer failures, it is a very effective means of identifying those units that are particularly at risk, thus allowing palliative measures to be put in place. In some cases, for example, it may be possible to take action to improve the condition of the transformer, while in other cases an at-risk unit may be moved to a less arduous duty to extend its useful life.

Despite the benefits, there has in the past been some reluctance to put in place programmes of routine transformer testing on the basis of the cost and disruption involved. These arguments are no longer valid.

In present day conditions, if a testing programme prevents one single transformer failure, it will have paid for itself many times over. In addition, modern transformer testing techniques yield accurate results rapidly and with a minimum of disruption.

Those utilities that have not already done so have every reason, therefore, to implement routine transformer testing without delay and reap the benefits of doing so. Such a programme is an affordable measure that can play a big role in ensuring the reliability and continued resilience of the supply network.